I’m not a hunter but I am told, that back-in the-day, in places like in the arctic, where people sometimes might hunt a wolf, they’ll take a double-edged blade and they’ll put blood on the blade and they’ll melt the ice and stick the handle in the ice, so that only the blade is protruding and that a wolf will smell the blood and wants to eat.
….
The wolf will come and lick the blade trying to eat and what happens is when the wolf licks the blade, of course, he cuts his tongue, and he bleeds and he thinks he’s really having a good thing and he drinks and he licks and licks. Of course, he’s drinking his own blood and he kills himself.
….
That’s what the Imperialists did with Blacks, with drugs and alcohol. You have these young brothers out there who think they are getting something that they gonna make a living with, getting something they can buy a car.
….
If white people have cars, why can’t I have a car?
If white people have gold, why can’t I have gold?
If white people have a house, why can’t I have a house?
….
They actually think that this is something that’s bringing resources to them. Instead, they’re killing themselves just like the wolf was licking the blade and they’re slowly dying without knowing it.
….
That’s what’s happening to today’s community, you with me on that?
….
And instead of blaming the hunter who put the damn handle and blade in the ice for the wolf; the wolf gets the blame for trying to live.
….
That’s what happening in today’s community. You don’t blame the person, the victim. You blame the oppressor. Imperialism and white privilege are the enemy…was the enemy when it first came to Africa and snatched up the first African brothers and sisters here against their will and is the enemy today.
….
And that’s the thing that we all have to understand and come to terms.  I adapted this from wolves by Deadprez. 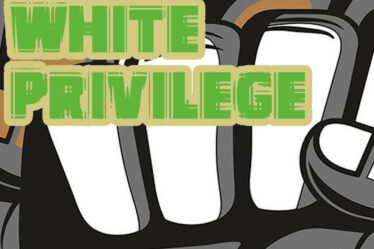